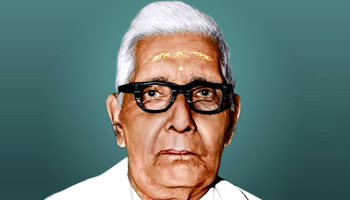 Sri. Neelakandan Mooss hailed from the Eledath Thaikkattu Mooss family of Thaikkattussery, Thrissur. His father, Sri. Narayanan Mooss, was a renowned practitioner and was bestowed the title "Vaidyaratnam" by the then Viceroy of India, Lord Reading in recognition of his meritorious contribution to the medical field. Following his father's footsteps, Sri. Neelakandan Mooss took to Ayurveda and started the Vaidyaratnam Oushadhashala in 1941.

In his continued efforts to enhance the reach of Ayurveda, he founded the Vaidyaratnam Nursing Home, Vaidyaratnam Ayurveda College and Ayurvedic Research Centre. Under his sustained efforts, Vaidyaratnam Group soon became a celebrated tradition in the history of Ayurveda. He was honoured with the prestigious national award, "Padmashree" by the Government of India in the year 1992.