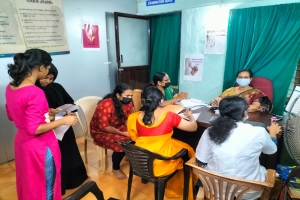 Department of Prasutitantra & Streeroga deals with Gynecology & Obstetrics in the field of Ayurveda. The department specialises in the maintenance of normal physical and mental health in all epochs of womens life. The department aims at providing specific treatment for following diseases:

In the area of obstetrics, Department  deals with providing:

Department  also specialises in the treatment of specific problems related to pregnancy and delivery after care including reduced growth rate, reduced breast milk after delivery etc.

The department has an out patient (OP) unit. O.P has an attachéd examination room where ante natal and gynecological examinations are done. The department has a bed strength 15 in the hospital. Minor procedure room is available in the hospital. Facilities are available in this room for doing procedures like yoni kshalana, Kshara Karma , Lower Abdominal Pichu, Vulval pichu, Yoni dhara, Yoni pichu, Yonipooranam, Pessary insertion etc.Theatre facility is available to do utharavasthy.

Department had a library containing of 52 books  - both Ayurveda and modern.

SPECIMENS IN THE DEPARTMENT :08

CHARTS IN THE DEPARTMENT : 75

MODELS IN THE DEPARTMENT :14

REGULAR ACTIVITIES OF THE DEPARTMENT

The department has an out patient (OP) unit on all days except Sunday from 8AM- 1PM. Ante natal and gynecological examinations and minor procedures are routinely done for OP patients. IP patients also undergo minor procedures and Uttaravasthy is also done on IP basis in the theatre room in the hospital block.

1. The Janany Garbharaksha programme was started since 2001 and was inaugurated on 31/03/2001 at Vaidyaratnam Ayurveda College Hospital, Poochunnippadam in

College at Kodakara block panchatyath for one year. Camp conducted at 7 different panchayaths and 648 pregnant ladies participated in the camp.

6. Conducted two days workshop about antenatal care for doctors working in different dispensaries in the corporation area in 2006

7. Conducted 15days workshop for  Asha workers about  Soothikaparicharanam  in 2006.

8. After 5years  of antenatal programmes,  department had conducted  Mathrusisusamgamam of Janany mothers and children on 02/04/2006 .

9. After 10years again department conducted Mathrusisusamgamam of Janany mothers and children on 16/12/2011 .

10. In 2013 – 2014 antenatal camp was conducted at an anganavadi in the cherpu block panchayath . It was conducted every Friday each month for 12months.

12. Third Janani Mathrusisusamgamam was conducted on 06/03/2017 at Vaidyaratnam Ayurveda College.

13. Free medical camp and awareness programme on world breast feeding day : 10th -15th may 2013. Around 30 women including pregnant and feeding mothers attended the

14. Awareness programme on menstruation and its disorders was  conducted at St. Mary’s Girl’s high school , Ollur on 31/10/2013 as a part of health programme.

15. Medical camp on Gynecological diseases, examination and management including surgical procedures was conducted from 17/02/2014.

16. Awareness programme on menstruation and its disorders especially PCOS  was  conducted at St. Mary’s Girl’s higher secondary  school , Ollur in 2018. Screening for

menstrual disorders was done by giving questionnaire to the students.

17. Awareness programme on menstruation and its disorders especially PCOS  was  conducted at St. Joseph’s women’s College in 04/9/2018. Medical camp was also conducted

on the same day.

18. Awareness programme on menstruation and its disorders especially PCOS  was  conducted at  CNN higher secondary  school , Cherpu on 13/6/2019. Screening for menstrual

disorders was done by giving questionnaire to the students.

21. Special OP was started on 09/12/19 for PCOS and other  related  menstrual irregularities and Uterine Prolapse on all mondays and thursdays. Free medicine was given to the

patients for a period of one week.

22. An awareness class was conducted on the topic Menstruation,  Menstrual Hygiene and Importance of diet & yoga during menstruation at Deepthi High School, Thalore on

07/02/20.It was conducted in association with Ardram Peoples Campaign.

23. An awareness class was conducted on the topic Menstruation and its   irregularities at Anganwadi, Thaikkattussery on 27/02/20 . It was conducted in association with

24. Webinars were conducted by the depatment starting from July 2020 on various topics.

25. A series of online awareness classes were conducted at Sri C Achutha Menon Govt College, Kuttanellur from Aug 2020 to May 2021 on the topics - Menstruation , Menstrual

26.  An online awareness class was conducted on the topic Menstruation, Menstrual Hygeine and PCOS at St Josephs College, Irinjalakuda on 17/09/2020.

27. An online awareness class was conducted on the topic Menstruation and its   irregularities at PVS GHS Parappukkara on 26/11/2020.

28. Special OP was started on 01/02/2021 for Slaishmiki and Viplutha on all mondays and thursdays.

30. Awareness class  and Medical camp was organised at Anganwadi Urakkam on 12/04/2021 in association with National Safe Motherhood Day.

31. Distribution of leaflets to create awreness regarding osteoporosis associated with Menopausal changes in association with National Osteoporosis month in May 2021.

33. Inaguration of "Matruraksha" Project - distribution of medicines for females preparing for pregnancy was done on 14/06/2021 Prasuthitantra OPD.

34. Pushpita - a series of online awareness classes in association with PCOS Awareness month  and in coordination with "Azadi ka Amrit Mahotsav" at various schools and